All work by this artist
Rosso Crimson 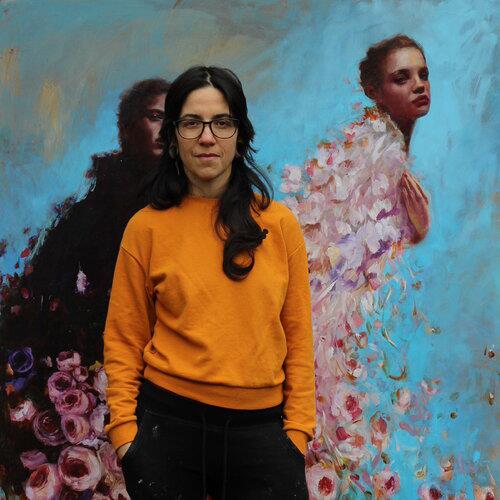 Italian born, Rosso lives and works in London since 2004. She holds a MA in International Communications and Human Rights and worked in advertising before changing her career direction to the visual arts.  Primarily a self-taught artist, Rosso has been selected as a 2021 finalist in the renown “Beautiful Bizarre Art Prize” international competition. Previously, she won the “Jackson Open Painting Prize 2019 (JOPP2019)” for the Portrait/Figure category; “The Holly Bush Emerging Woman Painter Prize 2017” and the “Emerald Winter Pride Art Award” in 2016. She was twice selected to participate in “Sky Portrait Artist of The Year”, aired nationwide in UK in 2020 and in 2019.
Her art has been featured in Colossal, Evolved Mag, MyModernMet, Artists&Illustrator The Artist’s Magazine, etc and on cover of Arena Magazine (Australia) and exhibited nationally and internationally (UK, Norway, US), included in Saatchiart shows, and sold to renown art collectors wordlwide.
In her portraiture, Rosso Emerald Crimson renders female subjects who emerge through a haze of pastels and muted tones. She infuses the dreamy oil paintings with responses to current affairs and questions about the future, which often serve as a catalyst for her projects. Issues of racial injustice, gender identity and environmental crisis have all played a major role in her work.
The artist often depicts the women and girls staring forward with unsmiling expressions. Stripped from any temporal/spatial connotation, the female characters in Rosso’s paintings are reimagined within timeless landscapes, evoking a sense of transcendental presence that connects with the viewers at different levels of the subconscious mind.
Technically, while the portrayal of the figures is achieved by a meticulous rendering using traditional oil painting techniques, the deconstruction (and reconstruction) of the surrounding derives from the juxtaposition of different media, including spray paint, vigorous scraping and scratching of the surface and application of metal leaf’s and gilding. The creative process is deliberately chaotic in the making yet geared towards the achievement of a sense of harmony and a visually engaging imagery.