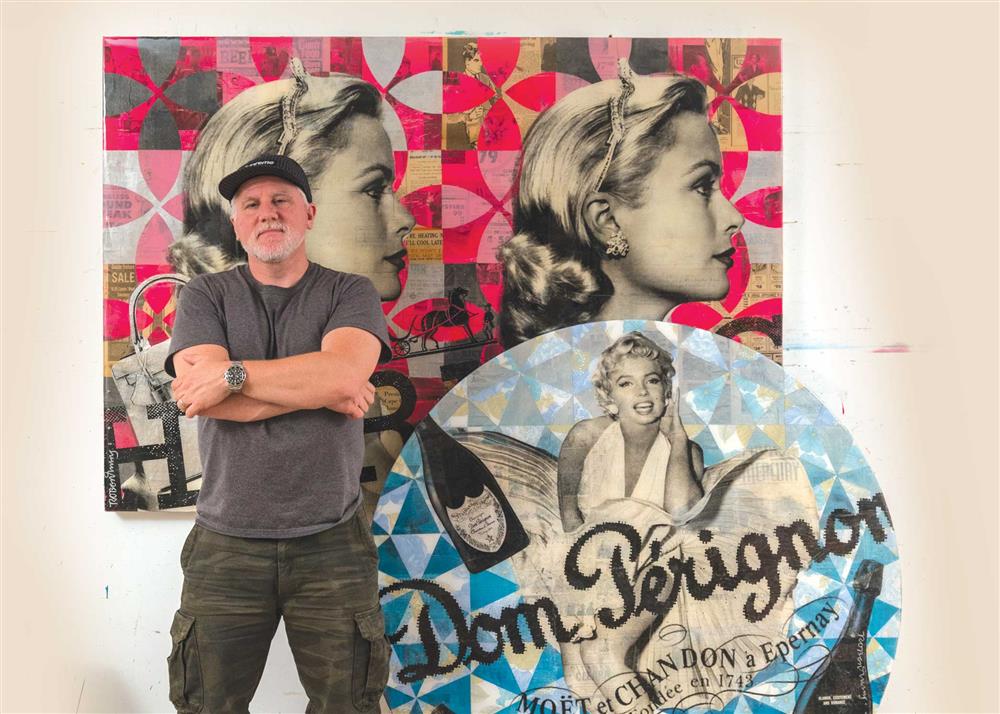 Chronicling a fascination with 1950’s and 60’s iconography, Robert Mars creates artwork that celebrates the commonplace objects and icons of an America long past in a thoroughly modern, and exquisitely constructed, manner. His eye for a distinct facet of American history is impeccable, and his ability to manipulate both the color and wordplay of vintage printed material has earned him reference with the likes of Andy Warhol, Robert Rauschenberg, and Richard Diebenkorn, among other masters from the School of Pop. By taking inspiration from the Golden Age of American popular culture and celebrating figures of the 1950’s and 60’s, Mars’ artwork chronicles an evolving relationship with celebrity. Through the application of a rich color palette and tongue in cheek attitude, Mars’ paintings evoke a vintage quality of design and pay homage to the idealized age of growth and hopefulness that was prevalent in the USA at the end of World War II. A time before the internet and mobile technology, where visual information was not constantly blasted to millions, and there was no such thing as instant digital celebrities, where instead people lived with the myth of the unique, untouchable and unforgettable personalities of Marilyn Monroe, Elizabeth Taylor, James Dean, Audrey Hepburn, Elvis Presley, and many others.
By merging his own concept of personal idols with those of mainstream culture, Mars is able to focus his work on a deeper analysis of the Golden Age of Americana. His early work focuses on many of the architectural and mechanical forms of the 50’s and 60’s, where muscle cars, motels, kitschy logos, and hulking monuments to the "modern" feeling of the time reigned supreme. More recently, however, Mars’ artwork has shifted toward the culture of celebrity, and he is strikingly attuned to the fact that these instantly recognizable and larger than life personalities continue to resonate not only with contemporary American culture, but with a worldwide market.
In 2014, after serious reflection upon his artistic thought, his process, wanting to explore traditionalism from another angle, and through influence from his wife, Mars began to delve deeper into American culture by focusing on Folk Art and Contemporary American Quiltmakers. By combining vintage wallpapers with quilt patterns Mars was able to further differentiate himself from the scores of artists using similar iconic themes. Mars is credited as being the first to incorporate quilt patterns and a folk art sensibility into a pop art aesthetic creating his own genre of folk laced pop.
This past year Mars has expanded on his body of work with abstract compositions. This body of work strikes a balance between chaos and control. Employing concepts rooted in abstract expressionism, Mars begins with multi-coloured paint layers of loose and dynamic brushstrokes on vintage newspaper. Choosing to sometimes highlight and sometimes obliterate this record of events acts as rebellion to structure and order. The vintage newspaper is a bridge to the events of the past; anchoring the work in history. The dialogue between the layers of colour; the events glimpsed through the paint; sets the palette for the final composition.
To apply order to the chaos Mars precisely cuts the painted newspaper into predetermined patterns. Based on traditional quilt patterns from American history, the mix of handcraft and the meditation of time contained in that often overlooked folk art, these tessellations echo the backgrounds utilized in his representational body of work. As he rebuilds the composition he keeps structure, composition, and color in mind. The process of discovery and sense of resolution is the result of reconstructing these compositions.
A graduate of Parsons School of Design in New York, Mars often references his decades as a graphic designer in his work. Mars’ artwork is exhibited worldwide including museum, corporate, and private collections in Munich, Tokyo, Amsterdam, London, Boston, New York, Los Angeles, Laguna Beach, Paris, Aspen and Dallas.