All work by this artist
Victoria Horkan 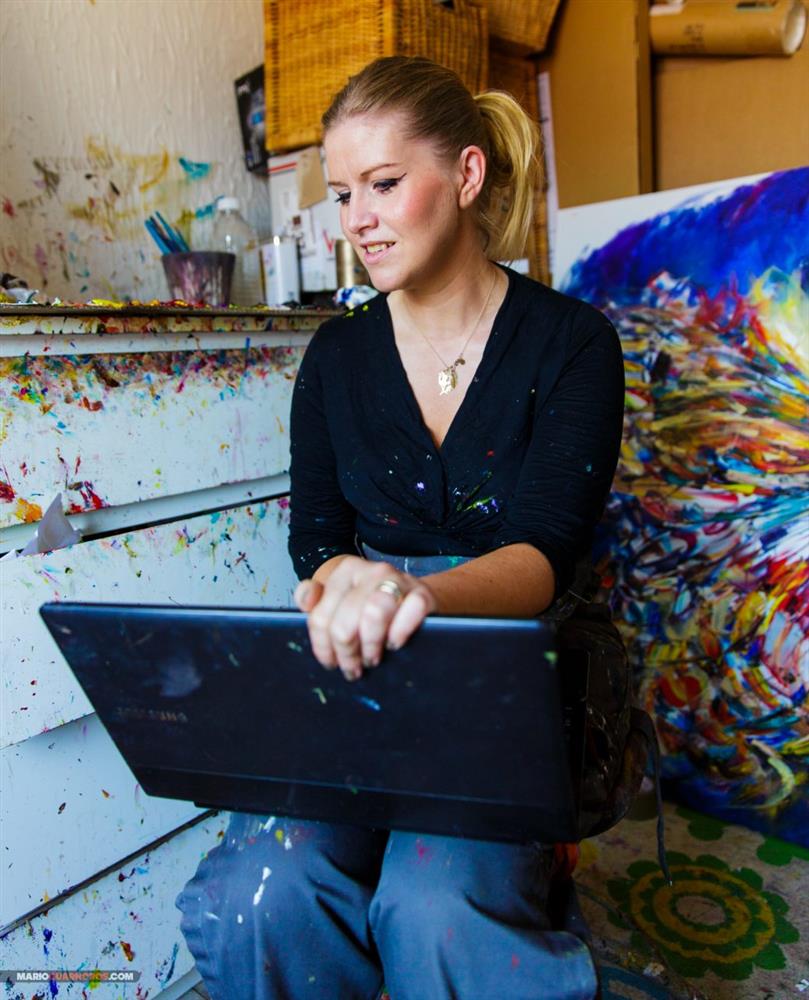 Thickly painted canvasses are not a new phenomenon, think of Frank Auerbach, Anselm Keifer, Jackson Pollock and Willem de Kooning. Laden with paint and metal and sand and bright specks of diamond, works like Keifer’s Starfall from 1995 carry the weight of impressions and gestures that seek meaning free from representational convention. Impasto seems too timid an adjective to describe the layers of paint and debris these artists heap onto their canvasses.
Victoria Horkan’s works are heavy with scoops of paint, but the kind of dark, violent imagery that occupied Keifer or Auerbach is a far cry from the joyful, vibrant scenes that animate Horkan’s paintings. As a young artist she trained as a textile designer at the University of Huddersfield in the UK and it was here that her tutors identified and encouraged an affinity with the “looseness” of paint that seemed at odds with the confines of more heavily mediated work with fabric.
It was at Huddersfield that, in the tradition of painters like Degas, Horkan was encouraged by her tutors to observe the dancers at the local dance hall. Captivated by their movement, she embraced media that allowed her the immediacy of expression required to capture a sudden leap or toss of hair.
It would be a mistake, however, to imply that this departure from textile design was accompanied by a departure from the realm of the tactile and an obvious love for texture and surface is translated onto her canvasses. There is a sense of the repetitive movement that characterises any work with fabric, like the kind of backwards and forwards of a shuttle through a manually operated loom. Yet where textile work usually implies a mutually tactile experience, shared by artist and viewer/wearer, Horkan has had to devise different strategies for involving audiences in her painted work.
She now draws her subjects from the natural world, depicting butterflies or schools of fish on overwhelmingly large canvasses, preferring to work on areas that measure at least 1m x 1m. The same wide flecks of paint that describe the rounded wings of a butterfly go on to become an aquatic environment populated by sifting branches of seaweed or darting fish. Where her butterfly works often depict a single insect, comprising collage elements as well as paint, her sea paintings are contextual, with a wide field of vision and multiple instances of movement. Clear representation is neglected in favour of pattern and colour and where the hand might have moved over cloth, the eye has to shift constantly to apprehend these marine scenes.
In Spotlight Fish Dance Horkan’s fish are gestural, articulated with broad brushstrokes, their brightly coloured flecks carved out of a rim of deep ultramarine blue. Here the individual is not a concern; the individual is not even identifiable. Rather, like a murmuration of starlings, the school of fish moves together in a porous, and yet visually impenetrable mass. The flicks of fish are all directional, moving out of the bottom left hand corner of the frame. There is the sense that, as the viewer, we only get some of the picture, that aquatic life moves quickly away from visual perception. Anyone who has snorkelled amongst unbleached coral or watched Blue Planet would recognise these scenes.
Horkan seems uncomfortable attempting to attribute any larger narrative to her body of work, other than it comes from her the paints are part of her and the tactile qualities that are conveyed almost reflect the joviality of her personality. For her, the experience of viewers looking at her painting is of paramount importance. She describes some of these experiences where, for some viewers, the butterflies on her canvasses become a poignant reminder of lost loved ones as part of a belief system that posits butterflies as departed human souls or symbols of life, death, and metamorphosis. She explains that she’s touched by these experiences, honoured that her work can arouse emotion in this way. Ultimately however, the symbolism that viewers wrest from these layers of paint is theirs alone, facilitated by a practice that holds at its core an optimism and commitment to colour, mark making and process.